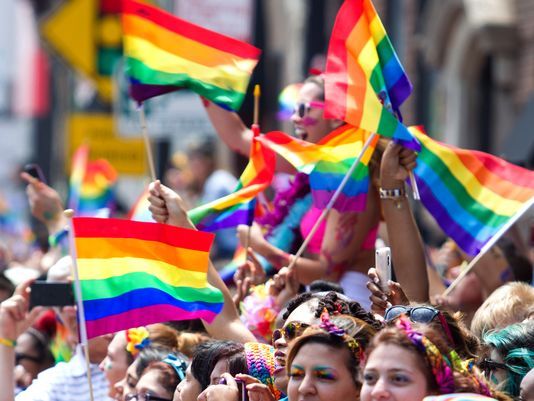 These vibrant displays of gay culture are now firmly part of American culture, despite a barrage of new anti-LGBT bills in more than half the states.

This year’s Pride events, like most of 2017, come with a tint of President Trump. The marches and parades, notes gay-rights group GLAAD, contain a hint of resistance to the new administration.

“Now, with an administration that is systematically trying to erase LGBTQ people from the fabric of this country,” GLAAD President and CEO Sarah Kate Ellis wrote for Billboard, “Pride is more important than ever.”

Take the worldwide Equality March for Unity & Pride, for example. The network of Pride marches across the country aims to address “concerns about the current political landscapes and how it is contributing to the persecution and discrimination of LGBTQ+ individuals.”

Catching a Pride is easy. GayPrideCalendar.com lists hundreds of events across the world, from Vienna, Austria, to Richmond, Virginia, and San Francisco.

Here is this year’s list of top Pride marches, compiled with the help of the Human Rights Campaign and GLAAD:

The City of Angels’ L.A. Pride 2017 includes performances by Brandy, Aaron Carter and Spencer Ludwig among a host of others. There is also a tour of Universal Studios, a Dodger game and a #ResistMarch.

In the nation’s capital, Pride involves a block party, a festival, rooftop pool party and a Miley Cyrus concert.

The city claims its Pride gathering is one of the largest, drawing more than one million people each year. In 2016, Redfin said San Francisco’s parade was the most popular based on Google Trends data. It includes a festival, rally, food, a parade and a concert.

Also making Redfin’s list was Chicago, which will host, for the 48th time, it’s Pride Weekend in mid-June. It includes a festival, a salute to veterans, a women’s comedy festival and a parade. That’s not to mention the barbecue, the 10K/5K and a lot of Beyonce and Britney Spears jams.